Castello Theme was originally released in June of 2013, making it one of our oldest themes and one of my all-time favorites.

If you will take a look at our Showcase page you will notice that there are a lot properties that are using it. Most of them are using the color scheme that the theme comes in, while others have decided to customize it a bit.

Today I am glad to announce that the theme has finally received an important update. Below I would like to explain what has been changed.

Castello is our first theme that now has a powerful Live Customizer built into the theme. You can now easily change all the colors and fonts that are used by the theme, which means you can now create unlimited color and style variations to better fit your brand.

Here’s a short video (5 minutes, no sound) that demonstrates this new feature.

This live customizer will be implemented in all of our themes in the following couple of weeks.

Even though you can now quickly create your own color scheme using the live customizer, I still felt the need that the theme should come with a new built-in color scheme in white. It can be enabled from the Theme Options page. 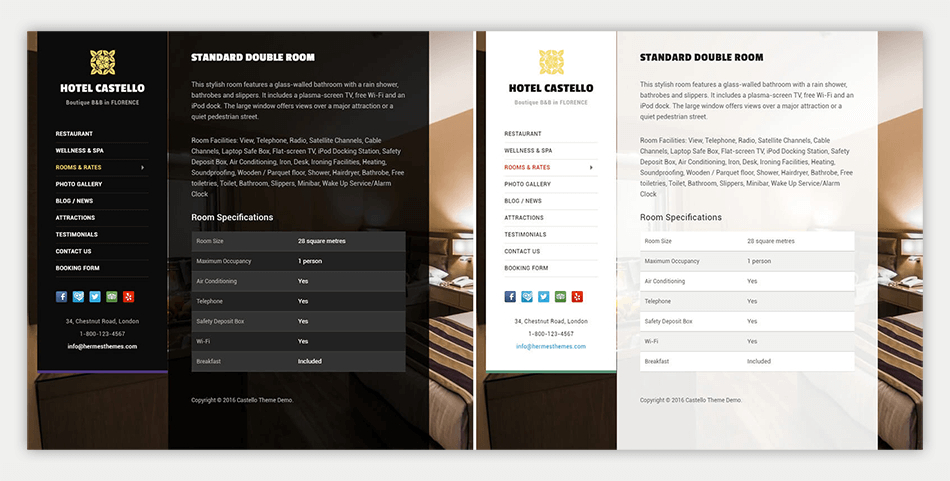 Some parts of the theme have been re-coded and better aligned with the current trends. The theme is now much friendlier towards mobile users.

We have added a new slide-in menu that works great on mobile devices. 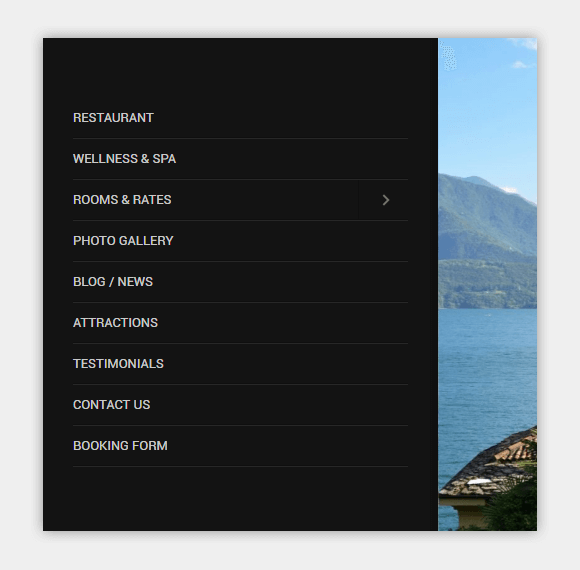 The previous slider script (Maximage) hasn’t been updated in a few years, so we decided to replace it with the more modern RoyalSlider plugin. Even though visually not much has changed, this slider can be customized more extensively by developers and provides some extra flexibility.

Prior to this update the theme was using two custom Google fonts: Open Sans and Droid Serif. The current version is based on the Roboto custom Google font, which looks a little cleaner and more modern. Either way, thanks to the new customizer, you can change the base fonts in a matter of seconds.

I am very pleased by the results of this update, as the look of the theme can now be easily customized without ever touching a single line of code, making it much more flexible and easy to adapt to any brand colors and style.

By the end of September I think that at least half of the themes will be updated with similar features: the live customizer, better responsive menus, etc.

This site uses Akismet to reduce spam. Learn how your comment data is processed.

We create easy to use WordPress themes and templates for independent hotels, B&Bs and inns. Fast and friendly support for all types of users, from absolute beginners to professional web developers.

This website uses cookies to improve your experience while you navigate through the website. Out of these, the cookies that are categorized as necessary are stored on your browser as they are essential for the working of basic functionalities of the website. We also use third-party cookies that help us analyze and understand how you use this website. These cookies will be stored in your browser only with your consent. You also have the option to opt-out of these cookies. But opting out of some of these cookies may affect your browsing experience.
Necessary Always Enabled
Necessary cookies are absolutely essential for the website to function properly. This category only includes cookies that ensures basic functionalities and security features of the website. These cookies do not store any personal information.
Non-necessary
Any cookies that may not be particularly necessary for the website to function and is used specifically to collect user personal data via analytics, ads, other embedded contents are termed as non-necessary cookies. It is mandatory to procure user consent prior to running these cookies on your website.
SAVE & ACCEPT